Bio:
Author Annmarie Kelly is a professional speaker, workshop leader and victory strategist, who has firsthand knowledge of the transformative power which determination and motivation, the stuff of victory, can have in a person’s life.

Growing up in her Italian-Catholic home, Kelly wasn’t a natural go getter but rather a shy and introverted girl – a “good girl” who felt invisible and insignificant and powerless to deal with family problems including alcoholism, sibling abuse and mental illness.

In her early twenties, a broken engagement and her father’s reaction to it, caused Annmarie to look at her life and where she was going. After a couple “dark” years, she realized she had a purpose but that she was following a path that would only give her more of what she already had: disappointments, regrets and lost opportunities. Annmarie understood that she needed to make a change; she decided to start on a new track.

Through the rest of her twenties and thirties, step-by-step, she changed the way she thought about herself and her future, set major goals, and let go of many of the limitations that were holding her back, from kicking the undesired habits of smoking cigarettes and being a couch potato to getting honest about her own sabotaging behaviors. She also let go of people and environments that became obstacles to her efforts.

While leaving the comfort of the familiar for something better was what she wanted, it wasn’t easy. But in time the effort paid off. The decisions Annmarie made then have enabled her to BE more and DO more than she ever thought she could and HAVE more of the kind of life that, on her old path, would only have been a dream.

Not content to keep that kind of empowerment and success to herself, Annmarie Kelly has made it her life’s mission to help other women find the same confidence, inner power, and most importantly the “feminine victory” within. Whatever she does, whether she’s speaking, teaching, writing, blogging or coaching, she shows women just how much power they have over their own lives, encourages them to LIVE VICTORIOUSLY - out loud and in living color – and shows them the skills they need to do it!

Annmarie Kelly owns and manages SkillBuilder Systems, a training and development firm specializing in management development and communication skills. She is also the founder of The Victorious Woman Project which focuses on the information, resources and skill building which help women empower themselves so they can live their best life.

Annmarie is a member of the National Speakers Association (NSA), the Greater Philadelphia chapter of the American Society for Training and Development (ASTDPhl), The Press Club PA and the National Association of Female Executives.

Annmarie Kelly is available for interviews in the Greater Philadelphia area, New York, Maryland, Delaware and Washington DC, and by phone anywhere. 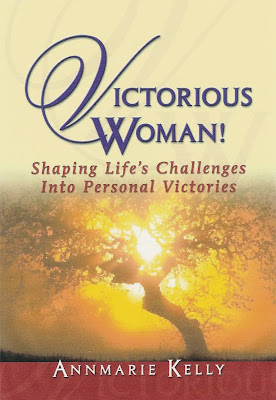 What’s a woman to do? If she makes a bad choice or gets thrown one of life's curveballs, is she forever doomed?

Kelly explains victory as the stretch you make out of your comfort zone and into the greater, fuller expression of who you really are – your authentic self. She demonstrates victory by taking you inside the lives of nine distressed women and showing you how they became victorious. You are likely to recognize something of yourself woven in each of these stories; each one will inspire and encourage you to forge your own victory over whatever is challenging you right now. At the end of each woman’s chapter you’ll find soul-searching questions that you must ask yourself to insure your own victories.

Author Kelly concludes the stories with a "lessons learned" chapter. Gleaning the best from each Victorious Woman, from the many other women she interviewed and from her own intriguing life challenges, Kelly describes the FOUR LIFESTYLES that either support you in victory or sabotage you, and the SIX SKILLS every woman has to learn to be in control of her SELF. She also gives you, her readers, the Victorious Woman Model to help you figure out what you need at different stages of challenges. The result is a book that is part inspiration, part motivation and part skill building. Some have called Victorious Woman "a blueprint for life" and "a practical approach to taking control of your life."

Since its first publication, many women say that they keep Victorious Woman! on their book shelf for reference or on their nightstand for comfort at the end of a long day. This "celebration of life" is an encouraging and enlightening read for women who want to create their own personal and professional victories.